Federal Attorney-General George Brandis has been repeating a tired and misleading defence to media reporting of a 30 per cent cut threatening community legal centres nationally from July next year.

Sadly for these providers of free legal help for people who can’t afford a private lawyer or get legal aid, the May Federal Budget left in place more than $34 million in cuts amid a broader Federal shortfall of $100 million over four years.

As we’ll see, a small funding announcement since the Budget has done very little to change this.

Yet repeated statements by the Attorney-General continue to suggest massive funding – a claim that is contradicted by the true picture.

Just last week, a spokesperson for the Attorney-General responded to a story about the serious impacts of cuts to two Victorian community legal centres as follows:

It’s time to put these claims under the microscope – in effect, to fact-check Attorney-General Brandis on community legal centre funding.

‘Big’ numbers aren’t so impressive when you break them down

While it is true that combined legal assistance services will receive $1.6 billion over five years, primarily under the National Partnership Agreement (NPA) on Legal Assistance Services, that agreement – imposed in June last year – includes the slated 30 per cent national cut to community legal centres and does not represent any new money in the Federal Budget.

It’s easy to hide such cuts to individual services like community legal centres when you package up the funding of many distinct and vital services together. And if you do it over a long enough period, the resulting lump sum can seem significant – even if the Productivity Commission says it falls short by around $200 million a year, which it did in a report the Federal Government has largely ignored.

Here’s a much bigger number

If we take a similar lump-sum approach to the Federal Government’s own spending on legal advice and representation, an interesting picture emerges.

Based on the latest figures from the Attorney-General’s Department, the Federal Government will spend more than $3.5 billion on its own lawyers over a similar period – well over double its investment on free legal assistance services for vulnerable people. The Federal Government might quite reasonably be asked to justify that.

Beyond the NPA, there has been some additional money for free legal assistance. However, the statement from the Attorney-General’s spokesperson quoted here could lead you to believe there was $45 million in new money for family violence legal help in the Federal Budget – not so.

Of that figure, $15 million comes from the Women’s Safety Package announced in September last year. The package provides $5 million a year for three years mostly to community legal centres, and will end in July 2018.

The balance of the $45 million is $30 million that was announced for family violence legal assistance post-Budget. Sliced off broader family violence funding, it will provide just $10 million a year for three years to be shared between legal assistance services and some family relationship centres. Funding to specific services will not be confirmed until after the election.

For community legal centres, a potential share of $10 million a year is insignificant in the face of the cuts and broader Federal funding shortfall.

The last part of the statement – that $25.5 million has been ‘restored’ to legal assistance services – is again nothing new. It was announced on 26 March last year, and essentially boils down to a postponement of cuts that were originally set to begin in July 2015. A temporary postponement of the Federal Government’s own cuts doesn’t sound as impressive as ‘restoring’ funding, does it?

So what’s the bottom line?

The Federation is calling for a reversal of the Federal cuts set for July 2017, the continuation of Women’s Safety Package funding of $5 million a year through to 2019–20, and a modest $14.4 million a year as a share of the $200 million annual funding boost recommended by the Productivity Commission across combined legal assistance services.

Nationally, that would give community legal centres around $61.6 million a year in Federal funding.

Over the next four years, the difference between that and what’s actually on offer by the Federal Government means we’re not just facing the $34 million of cuts left in the Federal Budget, but a broader funding shortfall of more than $100 million.

You can see why a potential share of $10 million a year for three years announced after the Budget just isn’t going to make much difference.

Essentially the funding picture community legal centres faced before the Federal Budget is the same bleak picture they still face after it.

Here’s an actual picture that tells the story. The ‘What we need’ line is the $61.6 million explained above. The green is what we actually get under the NPA with the Women’s Safety Package added in over three years. The red is how Federal funding will fall away from its 2016–17 level from July next year. 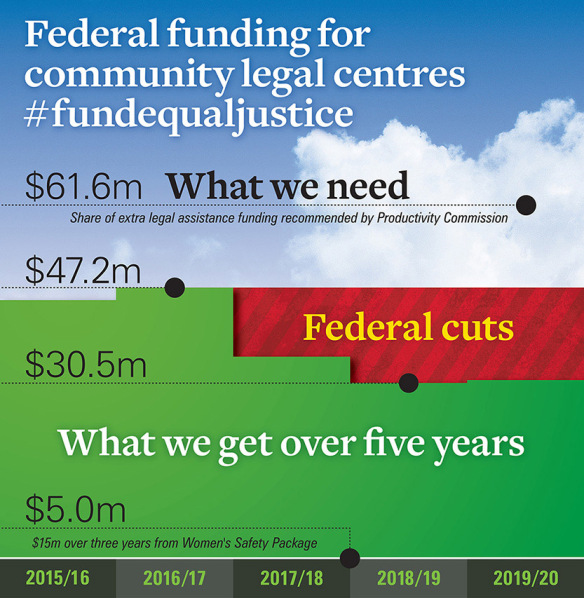 It’s easy to see that even if the cuts we’re facing from July next year were fully reversed, the resulting funding would still fall far below what we actually need.

What are the consequences for vulnerable people?

Even before the cuts set in, community legal centres are being forced to turn away many thousands of people who can’t afford a private lawyer or get help from legal aid for a range of serious civil legal problems.

Community legal centres help people for free, and demand is so great that in 2014–15 alone centres nationally turned away nearly 160,000 people – mainly due to inadequate resources.

When the cuts hit, many centres will be forced to turn even more people away, further reducing or even closing services, including withdrawing them from regional areas where help is already limited. Existing blackspots will worsen, and new blackspots will emerge.

The victims will include a growing number of women seeking help to get family violence intervention orders through the courts, people needing help with family law, people whose jobs are at risk from workplace mistreatment and discrimination, and people facing debt, consumer issues, unfair fines, eviction and homelessness. It’s not fair, and it ruins lives.

So what’s the fact-check verdict?

The Attorney-General’s defence of chronic underfunding and cuts to community legal centres is misleading in suggesting that funding is anywhere near adequate. In fact, his claims threaten the future well-being of thousands of vulnerable people across Australia.

It’s time for the Federal Government to come clean on community legal centre funding, and to fund free legal help in a spirit of fairness and decency.

Want to keep up to date?

The Change Toolkit: a guide to law reform, policy and advocacy work for the community legal sector.

Feel free to get in touch with us via phone or send us a message.

Our campaigning work is supported by your donations. With your support we can advance the campaign for a fair legal system.

Together with our members and communities, we campaign for social justice and a fair legal system. To have a real impact, we need your help.