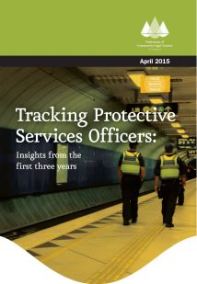 A report to be released on Friday by the Federation of Community Legal Centres has made eight recommendations to address serious concerns over Protective Services Officers exceeding their powers and using excessive force.

‘We are publishing this report to urge constructive solutions to the disturbing issues it raises,’ said Michelle McDonnell, a senior policy adviser with the Federation, today.

Tracking Protective Services Officers: Insights from the first three years details the findings of Your Rights On Track, a community legal project undertaken by the Federation from 2012–15 in partnership with Youthlaw.

‘The report documents cases of Protective Services Officers exceeding their powers by demanding personal information from commuters without legal justification and where no offence has been committed, forcibly searching commuters who do not comply, and using excessive force in a range of circumstances, including against vulnerable people,’ Ms McDonnell said.

Among the report’s eight recommendations are the removal of firearms from PSOs, requiring PSOs to request personal information only when legally justified, better public reporting and independent monitoring of use of force by PSOs and of the fines they issue, and greater flexibility for Victoria Police to deploy PSOs where they are most needed, rather than deploying them on every station, including those where little or no crime occurs.

‘When PSOs exceed their powers, there is more at stake than the violation of people’s rights – there’s a risk of escalation that could lead to the use of excessive force by PSOs. In the worst case scenario, there is a risk of excessive force by PSOs carrying firearms when they are dealing with vulnerable people in mental health crisis on train station platforms that are frequently crowded. These circumstances carry a heightened risk of fatal and avoidable shootings.

‘This report and a series of media reports suggest that excessive force is a continuing concern. Combined with the shorter length of training, less on-the-job experience and supervision PSOs receive compared to police, there’s a strong case to remove the option of lethal force. PSOs carry a range of equipment adequate to deal with the situations they encounter without resorting to firearms,’ Ms McDonnell said.

‘We need to protect the rights of the public, reduce the risk of excessive force by PSOs, and implement robust accountability as we also build the evidence base to assess whether or not PSOs are making a genuine contribution to actual rather than perceived public safety,’ Ms McDonnell said.

The Federation will refer its report to the Office of Victorian Auditor-General, which is currently undertaking an audit of public safety on Victoria’s train system. However, Ms McDonnell said there was a clear need to address the findings and recommendations of its report in the shorter term.

Want to keep up to date?

The Change Toolkit: a guide to law reform, policy and advocacy work for the community legal sector.

Feel free to get in touch with us via phone or send us a message.

Our campaigning work is supported by your donations. With your support we can advance the campaign for a fair legal system.

Together with our members and communities, we campaign for social justice and a fair legal system. To have a real impact, we need your help.